The only one 4G LTE Flat rates, with free calls and messages yu- yu, and internet at maximum speed 4G LTE 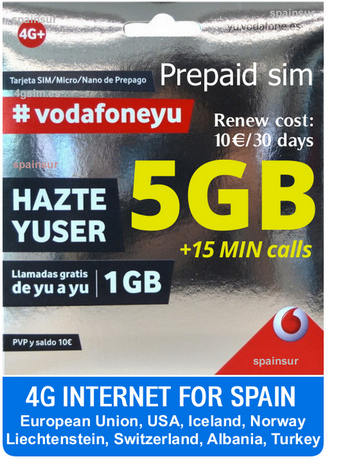 The 4G of Vodafone reaches 86% of the Spanish population.
4G is available in 1,900 populations: in all provincial capitals, in the main urban populations and also in many rural populations.

- Unlimited calls and messages since yu to yu.

- It operates throughout Spain including the Canary Islands and Majorca islands.
- Our Vodafone cards are valid 10 months since the activation or last top-up
- RECEIVE FREE INCOMING CALLS WHILST SPAIN

Use your Smartphone or Tablet as if you were in Spain when traveling through the countries of the European Union, Iceland, Norway, Liechtenstein, Switzerland, Albania, Turkey and, in addition, just for being Vodafone also in the United States. 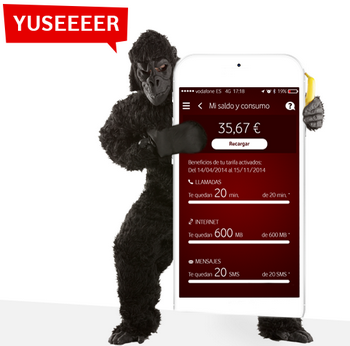 You need it? Well you have it.

- Direct recharge of your balance, if you are prepaid.
- Or check your last 12 invoices, if you have a contract.
- Always be on parody of how many Megas and minutes you have spent.
- Activate, deactivate and personalize your answering machine.
- All offers and benefits will be intended just for you. In addition, you will enjoy a multitude of exclusive promotions to get the most out - of your rate.

The 4G of Vodafone reaches 86% of the Spanish population.
4G is available in 1,900 populations: in all provincial capitals, in the main urban populations and also in many rural populations.

Note: We will register for you with your personal dates provided this SIM card. We need the ID card number or passport and date of birth in order to activate it, after making the purchase
(Please indicate it in the Payment)

We ship worldwide, to your home, hotel or where you like!